Suspense! I love to write it. It's a real departure from my humorous mysteries and romantic comedies. A woman finds herself in danger she doesn't understand and has to stay alive long enough to figure out what's going on. It's an adrenaline rush from start to finish, for both the reader and the writer. Come along for the ride where trust can cost you your life, and the lack of it is equally dangerous.  Add a dash of romance and you've got one of my favorite types of books. I hope you enjoy them.
NO SAFE PLACE 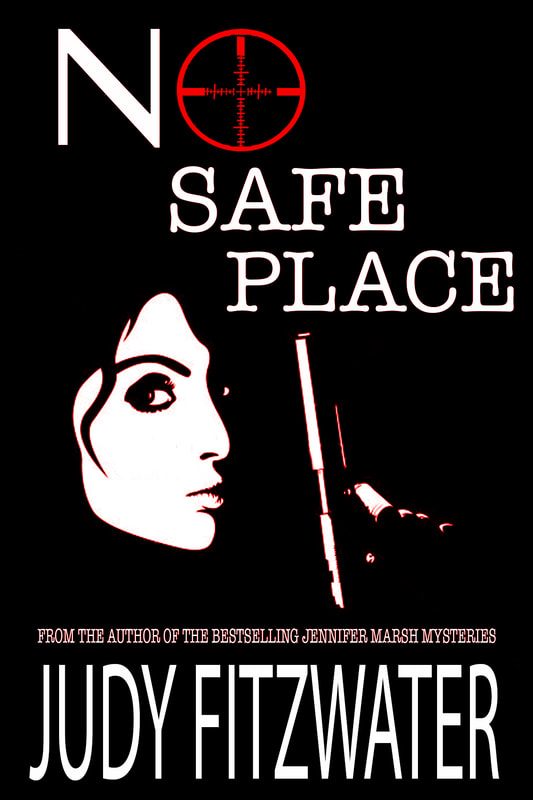 College professor Elizabeth Larocca’s worst nightmare has suddenly become reality. The shadowy past of her estranged dead husband Stephen has put both her and their 23-year-old daughter Cara in danger. His enemies are after them, convinced they know a secret Stephen took with him to his grave. Their only choice: flee and desperately try to unravel why Stephen was killed. But which of Stephen’s friends pursuing them can Elizabeth believe? One wants her dead. One wants to protect her. The wrong choice could cost both her and her daughter their lives.

PLEASE NOTE: This book was previously published with another cover. It's available in both ebook editions from your favorite ebook retailer and in a paperback edition from Amazon.com
DROWNING IN AIR 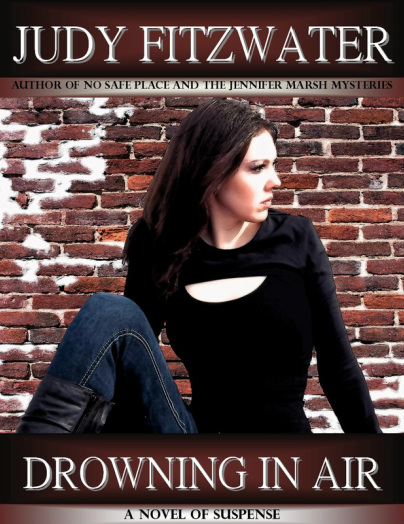 Blood. All over her hands. And Eva Keller doesn't know how it got there or whose   it is. Or how she got to a gas station in downtown Washington, D.C., in the middle of the night with no car. The last 32 hours of her life are a complete blank. And the man she remembers going to meet is missing.

When she arrives home late that night, she finds ruggedly handsome police officer Simon Talbot waiting for her. She has no idea who he is or why she feels such a strong  connection to him, but he certainly seems to remember her. Can she trust  him?

Fifteen years ago, Eva watched helplessly as her teen-aged boyfriend  died in her arms, the victim of a drive-by shooting spree that took the lives of  eight people one August evening. That event shaped her life and  left her  damaged. Now a successful documentary film maker, Eva has only one  goal: to  prove on film that Luther Isaacs, a petty thief just released from  prison, was  the killer.

But someone is trying to kill Eva and will stop at nothing  to keep her from proving who killed those eight
people.

DROWNING IN AIR  is a taut romantic thriller, filled with twists and turns. It’s a story of  strength, survival, determination, love, danger,  and, ultimately,  redemption.


I recently did an interview for My Book Addiction and More about DROWNING IN AIR .  Here's the link to it and a copy of the interview below.
http://www.mybookaddictionandmore.com/interview-with-mystery-and-suspense-authorjudy-fitzwater/


MBA&M: Please give our readers a few tidbits about Judy
Fitzwater?

My dad was in the Air Force, so we moved around a good bit when I was
young. That means I don’t really have a hometown and that’s something I’ve
always missed. On the other hand, moving a lot taught me that we really do have
the ability to be whoever we want to be, that life is an adventure, one that is,
or can be, forever changing. And that home isn’t a place on the map. It’s
wherever your family is.

As for writing, it’s the only thing I’ve truly wanted to do
professionally.  When I wrote my first book, I didn’t know anyone who had ever
published a novel. I was living in North Carolina with my husband and raising
two small children. I took a job freelancing for a local weekly newspaper. It
didn’t pay much, but I could work from home and write while my kids watched
Sesame Street or napped. It taught me to meet deadlines, learn organization, and
sometimes make an article out of almost anything. Oh, and I got to cover the
superior court trials for our county, which was always interesting. That’s when
I started writing my first mystery. I’d write some, put the manuscript away for
months, take it back out, and work some more. This went on for several years.
Then one day I took it out, and, to my surprise, it was almost done. I finished
it just before my husband was transferred to D.C. That first book didn’t sell,
but I found a terrific writers’ group and rolled all of my fellow writers’
frustrations over publishing into the humorous six-book Jennifer Marsh
Mysteries.  Ironically, DYING TO GET PUBLISHED, a novel about a writer desperate
to get published, sold on its first outing, unsolicited, to the head of the
mystery department of Ballantine Books. It was a book I thought I’d never sell
because it skewers the whole publishing industry. And now I’ve switched from
writing cozy mysteries to romantic suspense, which I also
love.

MBA&M: What was the inspiration behind writing “Drowning In
Air”?

I was living in the Washington, D.C., suburbs in October of 2002  when two
snipers terrorized the area for three weeks, killing ten people and wounding
three more before they were caught. It was a horrible experience. The shootings
seemed totally random. A woman shopping at a Home Depot, a bus driver, a man
mowing grass… Everyone felt at risk. Even stopping at a stoplight seemed
dangerous, and news anchors were actually telling people to move quickly in a
zigzag manner when going to and from their parked cars. People were having their
groceries delivered to their homes rather than go to the store. It made me
wonder about the victims and the people who loved them, how those events
affected their lives. I didn’t write about it right away, but it was something
that stayed in my mind, and I knew it would someday wind up as the germ for a
book. In DROWNING IN AIR, it’s a drive-by shooting spree that kills eight people
in a single evening. My heroine Eva is out walking with her boyfriend. He’s shot
and dies in her arms. I wanted to explore how a seventeen-year-old would react
to that sort of tragedy, how she could find a way to cope with life after that
experience. Eva Keller chooses to make herself strong, to learn martial arts, to
master weapons, to take charge of her life in a way most of us can’t even
imagine in order to keep her fear at bay. She believes that no one can take life
for granted, that it can be snatched away at any second. The book begins fifteen
years after the shootings when Eva is thirty-two and a successful documentary
filmmaker. The shooter in my book has never been brought to justice, and Eva is
determined to see that he is. Besides being a good mystery with plenty of
suspense, the book is  about her strength and her finally coming to terms with
David’s death. She has to accept that she has a future and that she has a right
to be happy and live without fear. She has to heal. And she has to give herself
permission to love someone.

MBA&M: What made you decide to write mystery/suspense
genre?

I’ve always loved reading mysteries—from Agatha Christie, Dorothy Sayers, and
Gothic romances to hard-boiled detectives and true crime.  I love the puzzle,
the ingenuity of the villain, and the sharp wit of the detective. When I decided
to write novels, it was an obvious choice.  I don’t write using an outline and
usually don’t know who the killer is until I get several chapters into the book.
I begin with a hook, a situation that intrigues me and work outward from there.
I kid that my outline is someone gets killed and then someone solves the crime.
If I wrote strictly about relationships, I’m not sure I’d be able to figure out
when to end the book—unless I killed somebody off. My Jennifer Marsh mystery
series has a lot of humor in it, along with what I hope are intriguing plots.
But I try to never let the humor play down or any way detract from the fact that
someone is dead and that’s tragic. As for writing suspense, what could be more
fun than putting someone in an impossible situation and watching them work their
way out of it. Of course the catch is that I’m the one who has to figure out HOW
they’re going to survive.

MBA&M: If you don’t mind, tell our readers a little about the
publishing community for self published authors?

The publishing industry is changing rapidly, and we authors, as well
as traditional publishers, are feeling our way through this brave new world.
I’ve found other authors, who’ve decided to take charge of their own books, to
be extremely generous in sharing information.  I think it helps tremendously to
have been published the old-fashioned way. I’m familiar with all the elements
that go into putting a book on the market, from editing to title and cover
selection, to writing blurbs and marketing the product.  NinC, an organization
for traditionally published writers, has been invaluable in offering
information, as has Backlist e-Books, which was formed to help writers make
their out-of-print books available for readers who may have missed them the
first time around. A lot goes into self-publishing.  It’s important to keep the
quality of the book up to a professional level. Working with a critique group or
partner continues to be invaluable. But all those things we authors used to
gripe about—lack of control over titles and covers, insufficient publicity,
etc.—have now landed squarely in our laps.  It’s great to have control, but it’s
a lot of responsibility.  And having others share their experiences—what works
and what doesn’t—is truly great. Without a backlist or books currently in print,
I’m sure it’s hard for a new writer to self publish, but you hear amazing
stories of people who have done it and become very successful. I think there’s
real joy in not having to worry that a book fits the exact requirements of a
specific publishing house. No more rejections that say, “Loved the book, but
it’s just not right for our house.”

MBA&M: What do you find is the hardest experience in
self-publishing promotions?

I’ve never been a big fan of promoting my books. I did a lot of book
signings and most were like watching paint dry. It’s hard for me to ask people
to buy my books, even when I KNOW they’ll enjoy reading them. I do, however,
love to talk about writing and about my books, so I’ve done a lot of public
speaking and enjoyed being on panels at mystery conventions. Doing things like
this interview are fun for me.  But how to get the word out about any new book,
especially when there are so many to choose from on the market, is difficult.
DROWNING IN AIR is my first independent release, which means I’m really just
learning my way with this one.

MBA&M: Do you find bloggers, and reviewers do not want to review
or promote self published authors? Why do you think this is so? And how do you
think this can be changed?

It’s definitely harder to get reviewers and bloggers interested in
looking at self-pubbed work, but having traditionally published books has
helped. I’m sure the ones that won’t review independently published books are
missing out on some really great reads. It will change. Self-pubbing is
relatively new, at least as far as the Internet is concerned. I’ve heard
multi-published writers say they’ll never go back to traditional publishing.
And I must say it’s a real thrill to select my own covers and blurbs, to have my
books out there exactly how I want them to be. Reviewers will have to catch up
with the changing reality of publishing, just like the rest of us.