LOVE AFTER DEATH
She never found love in life…Is it possible she’ll find love after death?
Something unexpected happens to Cindy Thomas during a mystery weekend at the Ferris Mansion. One second she’s enjoying a performance with astonishing special effects. The next, she’s dead, surrounded by a troupe of long dead actors who aren’t special effects at all. Harvey, her dream guy, is no longer a dream. He’s real—a real ghost.
Suddenly, this new existence is complicated and scary and amazing, leaving her wondering if she’s made the worst mistake of her life, her death, or whatever you want to call it. Cindy will have to decide…should she step through the gateway to Heaven, or is Heaven actually here on earth, in this handsome ghost’s arms? 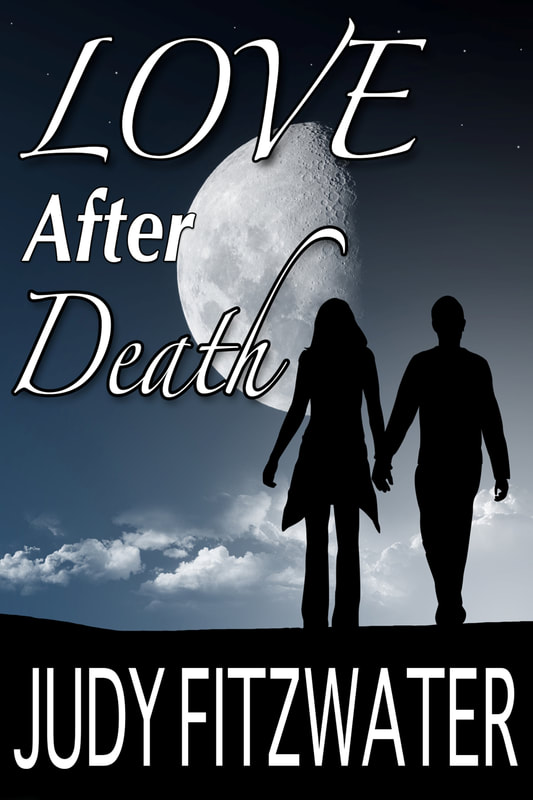 Humor is a delight to write. I loved creating a haunted mansion in Pennsylvania filled with an array of ghosts who have all the problems (and then some) of the living. Add Talia and Rex's love story on top of that, and I truly enjoyed the adventure that turned into Vacationing with the Dead. I hope you will have as much reading it as I did writing it. 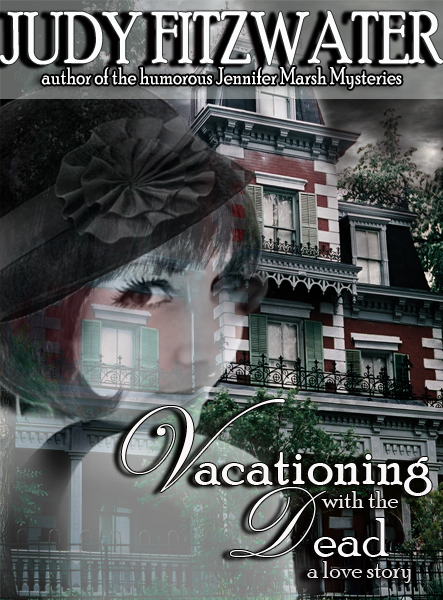 VACATIONING WITH THE DEAD

Readers will find ghosts, mayhem, and all out fun in Judy Fitzwater's new romantic comedy, Vacationing with the Dead.

When Rex Ferris’s great, great Uncle Nate dies and makes Rex promise to take care of the
Ferris Mansion and “everything in it,” Rex has no idea the “everything” includes  ghosts. Now he’s stuck with four ghosts, all actors, who have no intention of  moving into the “Light.” With maintenance costs rising at the huge, old mansion,  and four bored spirits who want to act, Rex does the only thing he can think of.  He turns the mansion into a murder mystery weekend destination with incredible  special effects that aren’t really effects at all. But not content with his  growing success, Rex makes one fateful decision: he advertises his new  enterprise in The Traveler’s Companion, the nation’s premiere travel  magazine.

Trapped in the basement of the Traveler’s Companion’s offices  in Washington, D.C., dreaming of traveling the world and reviewing exotic  resorts for the magazine, is Talia East. It’s her job to input and format ads  for the magazine. But the closest she’s ever likely to see the world is gazing  at the posters that line her tiny, gray cubicle….That is, until one strange ad  comes across her desk which begins, “Vacation with the Dead.” It sounds  ridiculous, even hokey, yet somehow intriguing. But maybe, just maybe, it could  be her ticket out. IF she can write one knock-out article and IF the effects are  even half as amazing as Rex Ferris promises, she might just land her dream job.

What she finds at the Ferris mansion will forever change her life and  her understanding of true love. But the path won’t be easy. Mediums, spirit  guides, cutthroat critics, interfering coworkers, and an old
boyfriend are all  on hand to complicate Talia and Rex’s quest.

Vacationing with the Dead is  a funny, sweet romantic comedy in which true love is not just for the living,  and its obstacles don’t end after death. It’s a fun romp filled with peril,  mystery, unforgettable characters,
and the adventure of finding everlasting  love.